why do we resist bath safety?

Over the past few decades, we have made the world safer in so many different ways. We use seatbelts when driving in our airbag- and antilock brake-equipped cars. We wear helmets when bicycling, skiing, and rollerblading. We require safety fencing around pools and many people install pool alarms to let them know if someone falls in.

If we’re truly concerned about safety, why do so many of us leave those concerns at the bathroom door?

The bathroom is one of the most potentially dangerous rooms in the home, particularly for older adults. Why? Let’s start with the wet and slippery surfaces, loose rugs, and sharp corners. Next, add in the physical challenges many older adults experience: difficulty with balance getting in and out of the bath or shower; trouble bending and reaching to adjust water temperature or wash body parts; difficulty seeing without glasses or contact lenses. It makes for one seriously dangerous mix. Statistics are hard to isolate, but a CDC report credits bathroom accidents with causing over 234,000 injuries in 2008. Among older adults, bathroom incidents accounted for 2.5% of all unintentional injuries.

The frustrating thing is, so many of these injuries can be avoided by using simple, easily-affordable safety devices. Many of them make bathing safer and more convenient for people of any age, not just older adults. So why do so many of us choose not to make our bathrooms as safe as they can be? We explored this question with some recent bathroom safety converts.

When Paul Molinski’s wife suggested installing grab bars in their bathroom, his first concern was appearance. “Hospitals and nursing homes have bars next to the toilet and shower,” he said. “And that’s what I associated them with.” It’s true that medical facilities have safety bars in the bathrooms, but that’s not what makes those places institutional. The truth is, a set of grab bars could be the very thing that keeps one out of a hospital setting. Nearly 80% of bathroom injuries are caused by falls, which can cause serious injuries such as hip fractures in older adults. With two thirds of bathroom injuries occurring in the tub or shower, it’s easy to see this is a major safety hot spot. And it begs the question: if everyone had grab bars in their shower, how many fewer injuries would occur each year?

Once Paul came around to the idea of installing grab bars, he realized their benefits immediately. “I don’t actually know how I steadied myself getting in and out of the tub before, because I definitely use the grab bars every time I take a shower these days. And I do feel a lot safer!”

Caroline: “I’m fine as long as I take it slow and don’t bend too much.”

When physical challenges make it hard to wash one’s body while standing in the shower, safety and hygiene are both compromised. Caroline Welker 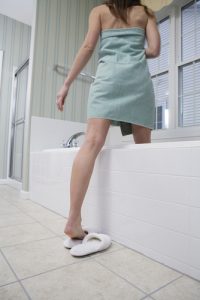 stubbornly refused to admit this until confronted by her daughter. “It was pretty embarrassing, but I’m glad she said something. I had stopped shaving my legs because it was too hard to bend over in the shower. So I quit wearing skirts, thinking no one would notice.” Rather than making trade-offs, Caroline’s daughter convinced her to trade up to a comfortable shower seat and a handheld shower head with an extra-long hose. Sitting while showering helps take the pressure off and makes bathing both efficient and relaxing. “I actually enjoy taking a shower now,” says Caroline. “It used to wear me out, all the bending and balancing and standing the whole time. It was supposed to be my first step in getting ready for the day, but some days it just made me so tired I didn’t want to do anything afterwards!”

When looks are as important as comfort, Drive’s teak shower stool and shower bench are made from natural teak, just like the accessories at many high-end spas. “Actually,” said Caroline, “my sister used my bathroom a few weeks after I got it, and the shower curtain was partly open so she could see the stool. Instead of questioning why I would have something like that in the shower, her first question was ‘where can I get one?’” 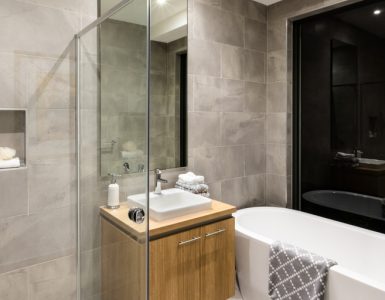 overcoming mobility challenges in the bathroom

Navigation the bathroom when you have a mobility challenge may be the most difficult, everyday living tasks one can experience.  The mere thought is exhausting and trying lift your leg over the bath tub or shower saddle, or steadying your gait when... 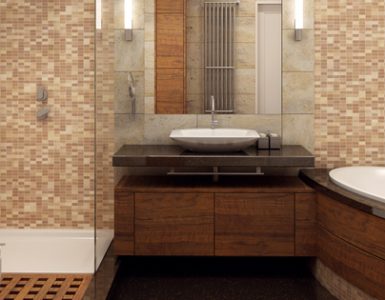 don’t give up style for substance

Say the words “bathroom safety” and what comes to mind? Grey, institutional surfaces? Harsh industrial lighting? A room stripped bare of design? Maybe once this was true, but bathroom safety is no longer just a concern in medical facilities. For... 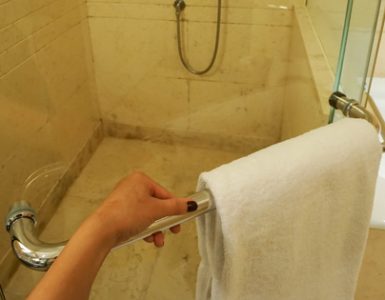 it’s never too late to think of bath safety

“I’ve fallen…and I can’t get up!” These words have become a pop culture punchline, but they’re much less funny when you consider the source.  The phrase comes from a commercial highlighting a common threat, particularly to senior citizens —...